HANDS OFF OUR HEALTH 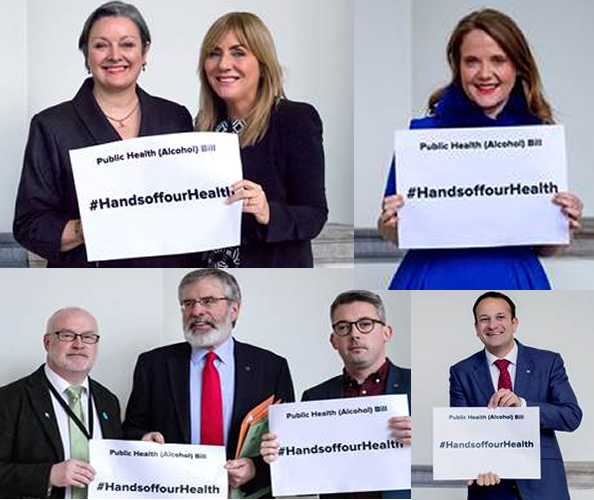 This April and May, we are calling on services, groups & individuals to support the HANDS OFF OUR HEALTH Facebook campaign to show public support for the Public Health Alcohol Bill. The legislation has been the subject of ongoing and, more recently, very intense lobbying from the alcohol industry and from retailers of alcohol at the local level. There is a huge need for local people to demonstrate to elected representatives that there is public support for the Bill. We are calling on you to take a lead in your organization and encourage your members to participate in and support this Facebook campaign.

The Public Health (Alcohol) Bill contains a package of measures designed to begin to tackle our harmful relationship with alcohol, including measures that address the key areas of alcohol pricing, marketing and availability.

INDUSTRY LOBBYING AND THE CONFLICT WITH PUBLIC HEALTH

The Public Health Alcohol Bill has been the subject of intense lobbying from retailers and alcohol industry players over the past year with various lobby groups and PR firms presenting their case to members of the Oireachtas in a bid to have strong public health measures outlined in the Bill watered down and / or removed.

Leading public health expert, Thomas Babor, in a 2012 review of the alcohol industry’s efforts to influence public policy initiatives concluded that the industry has, in recent years, intensified its scientific and policy-related activities under the general framework of corporate social responsibility (CSR) initiatives, most of which can be described as instrumental to the industry’s economic interests. In recent years, there is evidence of efforts toinfluence policy more directly and industry actors have been implicated in drafting the text of policy documents in four countries in sub-Saharan Africa.

‘Based on their lack of support for effective alcohol policies, misinterpretation of the Global Strategy’s provisions and their lobbying against effective policy measures, we believe that the alcohol industry’s inappropriate commitments must be met with a united response from global health community’

TIME TO HAVE YOUR SAY

There is a window of opportunity for groups and organisations concerned about the health and well- being of the nation to have our voices heard. We are seeking support, endorsement and promotion of a short social media campaign to highlight public support for the Bill over the coming weeks when the Bill is expected to return to the Seanad.